Watch this season’s unstoppable entertainment from one of 98 new and improved balcony seats. This new seating provides more seating space and more legroom. Best of all, beverage service is provided to the Suite Seats before the show and at intermission for all events presented by The Grand Oshkosh. The Suite Seats' service, comfort, and already incredible views make these the best seats in the house.

For six years, Larry David lived across the hall from Kenny. One day Jerry Seinfeld asked Larry for help creating a TV show. Jerry became famous, Larry became George, and Kenny became, well, Kramer. Not to be confused with the actor who played him, we are pleased to present “The Real Kramer.”

Sit back, relax, and enjoy an unforgettable night of music from actor/singer/songwriter Jeff Daniels and The Ben Daniels Band. With a sound that mixes Americana, blues, jazz, and rock, these talented songwriters sing originals inspired by Bob Dylan, Robert Johnson, and Jack White, to name a few. It’ll be an unforgettable show, first note to the last chord.

Without a single instrument, the six young men of Six Appeal Vocal Band deliver an unbelievable a capella performance. The group blends talent, charm and comical personalities, taking the a cappella show to a whole new level. This show will leave you smiling – and humming – for days.

Get front row seats to an incredible evening featuring some of the nation’s funniest women. Comediennes Alycia Cooper, Christine Stedman, and Kelly MacFarland bring relatable comedy to women. You won’t soon forget this night of side-splitting laughter and girls-night-out entertainment! 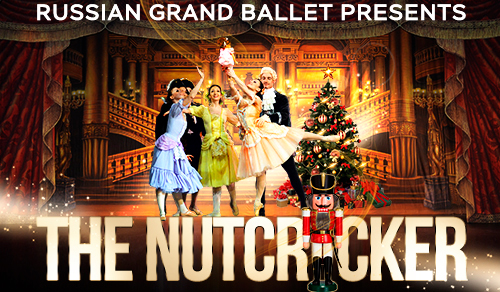 Before there was Toy Story, there was The Nutcracker. Masha, one of ballet’s pluckiest heroines, journeys to a land where toys come to life. The Nutcracker, based on a fairy tale by Hoffman isn’t just for Christmas. Tchaikovsky’s lustrous music and the magnificent choreography of Marius Petipa have made this beloved story a must-see for children of all ages. Russian Grand Ballet’s full-length classical production features Russia’s brightest ballet stars.

Called “one of the most promising bands on the bluegrass scene” by CMT Edge, The Barefoot Movement offers everything from soulful ballads to energetic banjo-driven beats and holiday favorites. The contagious energy of the group keeps audiences on the edge of their seats, waiting for what’s next. This is one holiday show you won’t want to miss.

Christmas With The Celts Adapted from the bestselling book, Population 485 is an evening of story-telling like no other. Set in New Auburn, Wisconsin, the play tells the comical but often tear-jerking true story of a forgotten small town. Featuring author Michael Perry as a member of the cast, the captivating anecdotes will leave you wanting to return to New Auburn again and again.

You won’t believe your eyes as you watch this captivating duo perform never-before-seen circus tricks. The Kamikaze Fireflies unchained performance includes juggling, hula hoops, German wheel, whips, and other circus tricks – with a big side of comedy. Join the Kamikaze Fireflies for an act of amazing acrobatics, circus feats, and top-notch humor. Fun for the whole family!

The spotlight hits Mister Mojo, glittering in his Mardi Gras finest! The band delivers a crescendo of Cajun accordion, fiddle, rubboards, and more! A voice exclaims, “From the Looziana Bayous, where the alligators got soul and the good times roll, it’s MOJO & The Bayou Gypsies!” The drums electrify your heartbeat, the crowd gets ready, and Mister Mojo yells, “Everybody say YEAH!”

The Four Phantoms In Concert

Their only 2017-18 performances in Wisconsin.

The Four Phantoms’ performance will include a celebration of the great Broadway musicals including, of course, The Phantom of the Opera. The Four Phantoms are comprised of an extraordinary group of performers - Ciarán Sheehan, Marcus Lovett, Brent Barrett and Franc D'Ambrosio - each of whom has starred in the title role on Broadway. Under the musical supervision of conductor, pianist, producer, and two-time Grammy winner David Caddick, these performers bring to the stage a once in a lifetime event - and the “show of the season.”

She hasn’t heard music in 10 years, but that doesn’t stop the unreal Mandy Harvey from captivating an audience. An entrancing performer and America’s Got Talent® phenom, Mandy lost her hearing to illness at the age of 18. The loss only motivated this inspiring singer and songwriter to dream bigger. Her incredible perfect pitch will move you as her infectious spirit inspires.

War of the Worlds

Join us as we revive this original script detailing the frightening tale of an extraterrestrial takeover. Seating for these performances will be limited as you will be in the studio with the performers—on the Grand Oshkosh stage.

Oshkosh Community Players presents the World Premiere of One Strange Night by Bradley Dokken. This farcical comedy involves a binge drinking mother-in-law, an obnoxious neighbor, a conniving art thief, a flirtatious young woman, and a bumbling police officer and his straight-laced partner.

Norman, Is That You?

Norman, Is That You? is considered to be the very first play to have dealt openly and comedically with homosexuality. Ben and Beatrice Chamber have separated after 30 years of marriage. When Ben shows up on the doorstep of their son, Norman, he finds Norman in a relationship with another man. =

Think of an elephant up in a tree! Think of a person too tiny to see! Think of a bird with a one-feather tail - just think! Visit the Jungle of Nool, Whoville, the Circus McGurkus and everything in between with Hysterical Productions’ Seussical The Musical!

A Special Thank You to Our Sponsors

The Grand Opera House is owned by and receives financial support from the City of Oshkosh.